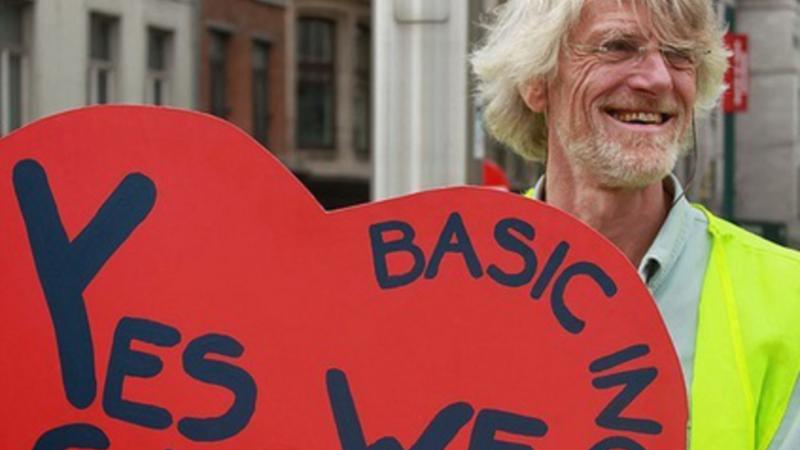 Philippe Van Parijs is a Belgian philosopher and professor at the Université Catholique de Louvain (UCL). He talked to EurActiv’s Tanja Milevska.

If you could first sum up the ideas that you presented at the conference.

I repeated my plea for the “Euro dividend”, which is the introduction, at the European Union level, of an unconditional basic income – individual, universal and unconditional, in all respects, at the level of €200 and funded by VAT, the European level VAT. I plead in favour of that proposal on the basis of distinct arguments, the most immediate one being to provide one precondition for the stabilization of the euro, which is some degree of redistribution across the borders of the various member states of the EU. This could not take a very complex form, funded in a simple way. The most realistic proposal along these lines in my view is a basic income funded by VAT.

On what did you base your research? How did you come up with those particular figures and the financing means?

The argument starts from a reflection on what the preconditions were for the stability of the dollar zone. Why could the dollar survive two centuries despite the immense differences between the development of the various states of the USA? There are there two stabilising mechanisms which are on the one hand migration between the various states. In Europe this migration across the borders of the member states is about six times lower than in the USA. And two, the other system in the United States consists in interpersonal transfers across the border, which is estimated to be between 20 and 40 times higher than in the EU. You think about it and realise that migration can increase, but will never be at the level of the United States because of our linguistic differences. Therefore you need transfers, more than in the US. But what form can make them sustainable? Then you think about how it works in our nation states. Germany, for example, has a significant degree of redistribution across the states. Some of these transfers are from the richest states to the poorest ones. It tends to be controversial, and it’s at a far lower level than the bulk of redistribution that happens through the social security system, which is interpersonal solidarity between people – pensions, child benefits, social insurance of various sorts.

So we need to think about what could be done at the level of the EU. It won’t be a sort of mega-welfare state covering healthcare, pensions, etc. It needs to be very simple. It should be something like a floor income provided to all Europeans, and is funded with the most Europeanised of all taxes, which is VAT. The reasoning which leads to the proposal starts from the functional needs of the currency union, and then it proceeds by elimination, by looking at various schemes which you could have, and you end up with a single proposal which can come in many variants. You can modulate the amount – the €200 – according to the purchasing power in various countries.

At the same time, this sort of measure would serve other functions, which are equally important; not immediately relevant, for the eurozone but important. The first is to stabilise the population, so that you don’t have this sort of crowding of the most prosperous cities in the EU by people who are forced to move away from where their roots just out of necessity. It would be a spreading of that wealth created partly by the sheer existence of the European Union. The other argument is the pressure of each of the national welfare states. They can do less and less well what they used to do quite well, because of the pressure of the single market. So we need to do more at the level of the EU in order to enable each of the national welfare states to continue to do their job as well as possible in the globalised context. And finally, it’s very important for the EU to be perceived by the people as a caring union, not only one that lifts protection to promote productivity and benefits Europeans in a very unequal way. It must be perceived by all the Europeans, not only the movers, but also the stay-at-homes, that the EU is doing something for them. That’s an essential reason for the legitimacy of the European Union.

So, those €200 are an indicative figure.

Yes, we need a number in order to make simulations. Even with €200, if you don’t modulate it according to purchasing power, it’s a massive increase in the average net income in countries like Bulgaria and Romania by about 40%. If you modulate it according to purchasing power, then the increase is not as significant, but it’s still close to 30%. If in the light of these simulations, you think it should be higher or lower, this can be discussed.

The idea has been ill-received and criticised by some of your peers, who have said that it would demobilize workers and is counterproductive for work in general by giving an amount of money simply “for being alive”. How did you respond to that?

It’s one of the criticisms, but it’s not the most serious one, because if you have basic income at this level, it wouldn’t change anything in the richer country because anyone who doesn’t have a higher income from the market receives at least that money in the form of benefits. In those cases, it wouldn’t affect the willingness to work. In other places, even in Greece, where you don’t have a guaranteed minimum income, it would make a difference. It would boost the income of people who have no income.

For me, it is not unacceptable that people should receive an income without conditions attached, because what we receive in this way is not the product of the hard work of other people. It’s a fragment of the massive inheritance we owe to nature, to previous generations, to technological progress, to the know-how, and all these gifts which we receive from nature, and the past. What they owe to their own effort is only a fraction of their standard of living, of their income. Part of these gifts, which we received from the past, are redistributed in a more fair way among everyone. That’s the fundamental justification for the un-conditionality of this basic income.

Would this basic income come on top of social benefits?

I wouldn’t say it’s on top, but it’s at the bottom, it’s a floor under all incomes. If someone is disabled, there will be a conditional disability benefit that will come on top, and those who have such benefits shouldn’t lose out as a result. And in the case of unemployment benefits too, it would replace the lower layer of these incomes. If you have unemployment benefits of €800 per month, if you have €200 basic income, you would receive those €200 unconditionally, and on top of that you would receive €600. Not €800. It replaces the bottom part.

How does that keep people out of “in-work” poverty, since these are very modest figures you propose?

Much of the poverty in work, as it is currently measured, is the poverty of part-time workers. The main beneficiaries, in an immediate sense of this basic income, are the part-time workers. Essentially what basic income does is make it easier, because it’s cheaper to reduce your working time when you want to reduce it, especially to take the job that provides you more training. Those who work part time will see their situation improve.

You see it as an income at EU level. But is there a legal basis for the EU to take such a measure?

One answer is that social policies are not a competence of the EU according to the treaties, and therefore forget it at the level of the EU as long as you don’t change the treaties. So one answer is that it is essential to change the treaty. It doesn’t have to be a massive overhaul of treaty change. The second response is that the first argument for a euro dividend has to do with the sustainability of the euro. As long as we don’t have something like that, we’ll just be hopping from one crisis to another in the eurozone, because we don’t have that buffering mechanism. The EU needs to do whatever needs doing in order to save the euro. That’s part of its task. You can call it social policy but it’s needed for a purpose that it’s not directly social policy.

What political parties have shown the most interest in such a proposal so far?

If you look at the idea of a basic income in general, traditionally it has tended to be supported in Europe by two main tendencies. One is the Greens, and the other the left Liberals. A typical example would be Democracy 66 in the Netherlands, one of the first political parties to come up with the idea in the late 1970s. Then it has appeal in left Christian movements, but to a lesser extent in the traditional social-democratic left. There are more people in the more extreme left that are also in favour of this idea. It’s a mixed bunch and it’s an idea that tends to be divisive both on the left and the right. We can’t expect a big coalition of parties like the EPP or the S&D to take it on in a unanimous way, but there are signs that some groups are attracted by the idea. The youth section of the Flemish Green party has made it its top proposal for its European campaign. Especially among younger people, among women, among precarious and part-time workers, the idea is appealing. This idea should be appealing to people who are concerned with the future of the euro. These can be people from any political denomination.

You said that you have discussed the issue with Herman Van Rompuy. Was he sensitive to the idea?

I wouldn’t say he is an enthusiastic fan of radical ideas of this sort. But he is aware, as most people who have responsibilities at the European level are, that we need some form strong form of systematic solidarity across member states. He has made proposals in that direction.